Agile is a disaster – Tom Gilb 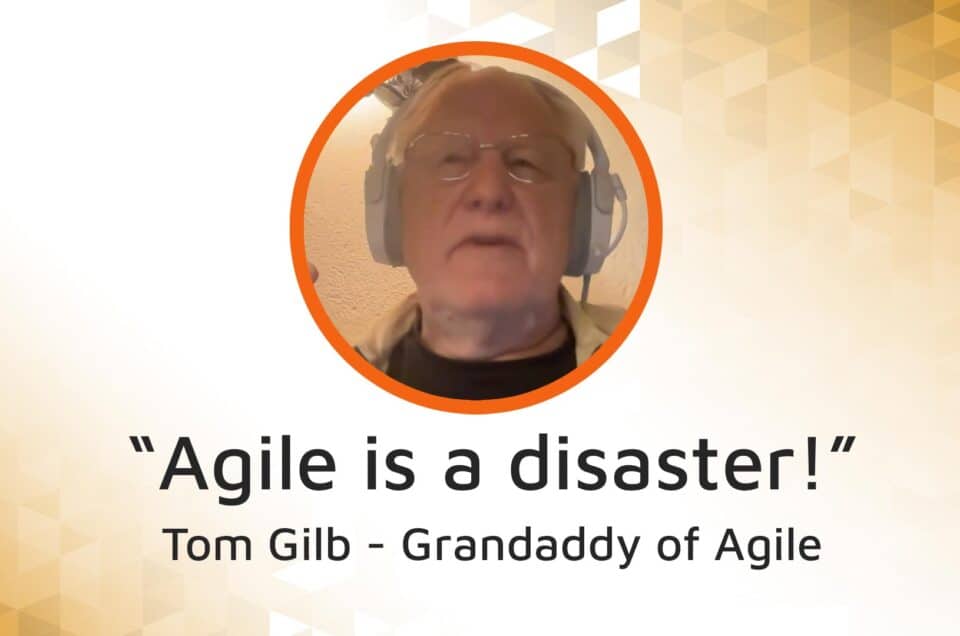 Well, it’s a disaster. The thing called Agile has fallen into disrepute. One, because they don’t do it properly. Two, they don’t get good results doing it. They hardly ever talk about results. But if you look at things like a Standish report, you’ll find that Agile is only slightly better in this huge failure rate to waterfall and that’s only because it gets some feedback rather than none. But for the decades of popularity it really hasn’t got much to brag about. And most people realize it is primarily driven by the racket of selling certifications which have no meaning and have no credibility and have no results to brag about.

So that’s fairly damning indictment there. Tom, what do you see in the future then? What’s the way forward?

Well, the title of my talk is Agile Engineering. There’s nothing wrong with the idea of doing things in small steps, but the trick is to get really good results from the projects. When you have like 40% of all projects are total failures and another 50% are partial failures and less than 10% are successful. And this has been going on for decades. We don’t have any good methods. Our methods fail, fail, fail. And we’re so used to it, we think it’s normal. So what has to happen is that people have to stop using methods that don’t work. Management has to demand results, good results, early results, continuous results, measurable results. Part of the problem is management has put up with this and pays the price. For example, on large government systems such as health systems, the systems spent eight years failing and then they ask for another eight billion or million dollars to keep on failing another eight years and they say we’re doing Agile, by the way, in their programming. Okay, but the key thing to look at is what the Standish Group looks at. It is to look at the failure and success rate of the projects and use that as a criteria for what to do and what not to do.

We’re not good enough at doing that. Got to study the projects that are successful and say, “Why don’t we do projects more like that?” And we know what successful is and we know how to do it.

Agile is a disaster – Tom Gilb